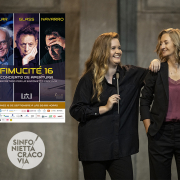 On Friday, September 16, the opening concert of Fimucité: ‘Kilar – Glass – Navarro’ will be held. A very special concert, as it will be the first time in the history of the festival, that a foreign orchestra travels to Tenerife to perform a symphonic concert.

In this article we bring you more information about this concert, and an exclusive interview conducted by Gorka Oteiza for SoundTrackFest, with the director of Sinfonietta Cracovia orchestra, Agata Grabowiecka.

Among all the events offered by the 16th edition of Fimucité (16 – 25.09.2022), in addition to the highly-expected symphonic concerts at the Tenerife Auditorium on the 23rd and 24th (read more), we would like to highlight the opening concert entitled ‘Kilar – Glass – Navarro’. 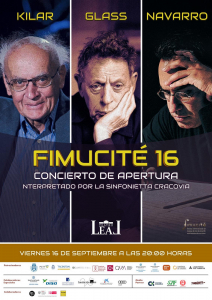 This concert, which will take place on Friday, September 16 at the Teatro Leal in La Laguna, will be performed by the Sinfonietta Cracovia conducted by Kasia Tomala, and will include the music of composers Wojciech Kilar, Philip Glass, and Diego Navarro.

Deepening the collaboration that has been uniting for more than a decade the festivals Fimucité in Tenerife and Krakow FMF in Poland, this will be the first time in the history of the festival, that a foreign orchestra travels to Tenerife to perform a symphonic concert. 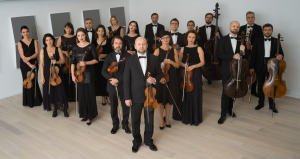 In the repertoire we will find music by three composers well-known to both audiences, and that, as a musical bridge, strengthen ties between the two festivals: Kilar in Poland and Navarro in Tenerife, making a brief stop in the work of the North American composer Philip Glass.

The concert, which already had a first performance in Poland in May 2022 during the Krakow FMF festival (read more), featured a somewhat different program, which has been adapted for the occasion. This concert is part of the International Tour “Kilar 90” of Sinfonietta Cracovia.

And we did not want to end this article without a brief interview with Agata Grabowiecka, director of Sinfonietta Krakow, who will give us more information about this very special event:

Good morning Agata, at SoundTrackFest we are very happy to greet you again! Thank you for dedicating your time to us. First, I would like you to tell us a little bit more about Sinfonietta Cracovia, especially for the Spanish public, who probably don’t have many references of the orchestra.

Sinfonietta Cracovia’s full name is The Orchestra of the Royal Capital City of Krakow Sinfonietta Cracovia. It has been established as a city orchestra with a great help of Maestro Penderecki, most famous Polish contemporary composer. They had the privilege of working and touring with him so at first the Orchestra was particularly appreciated for their performances of contemporary music. Sinfonietta has been involved in numerous productions promoting new music quickly becoming one of the most important and respectable orchestras in Poland. It consists of high-class musicians who are not afraid of new challenges and are very flexible so when Film Music Festival in Krakow was established, Sinfonietta Cracovia was a part of it since the very beginning. They mostly performed live to picture concerts which were the great finales of each edition of FMF including Lord of the Rings, Gladiator or Casino Royale.  International conductors and composers were always under a huge impression of the high-level performances and discipline of Sinfonietta Cracovia. I also, as a manager of Krakow FMF back then, really enjoyed working with them each year. 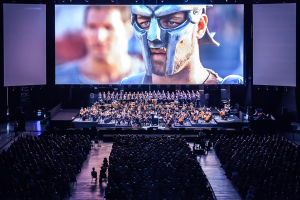 I would also like you to tell us about your work directing the orchestra, how you got there?

Together with Robert Piaskowski, the Artistic Director of Krakow FMF, I’ve been responsible for this festival’s artistic form being its producer, manager, and representing the festival abroad for nearly 14 years. After pandemic edition of the festival which was an enormous challenge I realized it was time to move forward. I felt that I still want to stay in the film music industry because this was what I always loved the most but I knew there has to be something more, I wanted to reach higher. And then, out of a sudden, a contest for a city orchestra director had been announced and my friend, Kasia Tomala, a female conductor who will perform at Fimucite in a few days, asked me to run with her as the contest regulations allowed to run in duos – Managing Director and Artistic Director/Principal Conductor. I felt that was a sign and thought “Why not?” although I never dreamt of becoming an Orchestra Director before. I was already a deputy director at Krakow Festival Office that organizes a few big festivals for the city, including contemporary and early music festivals, so I knew classical music world and wasn’t afraid to run. We took part in the competition and we won it defeating a few really strong candidates even one from abroad, an Italian conductor. I needed to get deeper into classical music but I really enjoy it and I use all my skills and experience I got producing music festivals for the development of the orchestra. It really works! 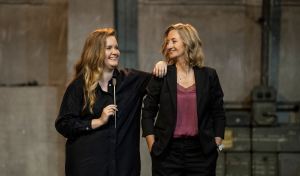 When it comes to film music, now I feel I have a new mission. Inviting more people to classical music world by combining classical repertoire with film music which is also a new classic in a way.  This November we are planning a concert with world premiere of Patrick Doyle’s Piano Fantasia, music from Harry Potter and… Mozart’s Piano Concerto – at one evening. I believe some of the film music fans will hear Mozart live performed by the orchestra for the first time and they will finally have a reason to come to the Philharmonic Hall. I think the classical music world should respond to the needs of today’s audiences not resigning from the high quality of performance of course.

Let’s move on to the concert. How did you come up with the idea of organizing a concert of this kind? How did you decide which composers to choose and which works to include in the program?

This was the first idea that came to my mind when I become the director of Sinfonietta Cracovia. I wanted to present at one concert the works of composers that succeeded in both – classical and film music plus I wanted to combine a program that would promote Polish music but also have the international potential.

This year marks worldwide celebrations including two of the most important composers of our time: Wojciech Kilar and Philip Glass. Wojciech Kilar would be 90-year-old this year and Philip Glass is 85. It seemed to me as a perfect match. Not very many people know how much they have in common. As young composers, Kilar and Glass found the most important teacher of the 20th century, the famed French pedagogue Nadia Boulanger. She taught them both musical technique. Kilar’s career as film composer found its ultimate expression with Francis Ford Coppola’s 1992 film DRACULA, not very many people know that Philip Glass wrote music to Dracula as well but it was a silent movie from 1931. It was the Universal Studios that commissioned him to write the score in 1999 and Glass decided to write it for Kronos Quartet. Kilar and Glass both maintained their creative integrity and same style whether writing symphonies or film scores, masses or concertos. This concert will show similarities between them and will prove how close film music and classical music world are to each other.

When Diego Navarro appreciated the idea and invited Sinfonietta Cracovia with this concert to Fimucité I immediately knew we should add his music to the program. It was the perfect moment to present him as a composer who can also easily find himself in the realms of both art music as well as commercial music. His style of composing matches this concept perfectly.

What can the audience that will go to the concert in Tenerife expect?

After premiering in Krakow the audience was captivated. Some of them were telling me this concert was a spiritual experience. Repetitions we can hear in one of my favourite soundtracks to the Hours by Glass are hypnotizing and the scores by Diego Navarro will only add more of this intimate atmosphere to the whole concert. All these 3 composers’ music – Glass, Kilar, Navarro –  is very emotional and moving. When we add the precision of Sinfonietta Cracovia’s strings it really creates an unforgettable and very deep musical experience. Fans of Fimucite remember Kilar’s Dracula live in concert – I know they liked it so I hope they will appreciate other works by Kilar – not only written for movies but also classical works that take a lot from local sounds. We invited great soloists – Alek Dębicz from Poland on the piano and a local singer María Candelaria Hernandez, soprano who will sing the piece from Kilar’s The Ninth Gate. Truly international mix but I know it will work perfectly.

What can you tell us about the ‘Kilar 90’ tour, which we can say started in Krakow in May this year?

Thanks to the financial support of Adam Mickiewicz Institute, which is a Polish government cultural institution that promotes Polish cultural diplomacy, Sinfonietta Cracovia will tour with Kilar/Glass project internationally. After Fimucité we will travel to Belgium where Dirk Brosse, the artistic director of World Soundtrack Awards, will conduct 4 concerts in different Belgian cities with us. It seems like another milestone in the collaboration of film music festivals and I’m really proud that Sinfonietta Cracovia is a part of it.

And to end this interview… What’s next then?

I’m not sure yet as there are plenty of ideas and its’ only the beginning of a new chapter, we’re writing but I feel sky is no longer a limit! (*Agata smiles*). Now I focus on Tenerife. Fimucité experience is one of my favorite parts of the year. 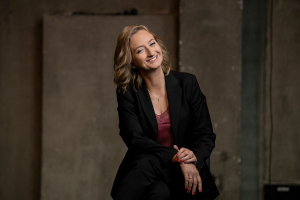 Thank you very much for your time, Agata, see you in Tenerife!