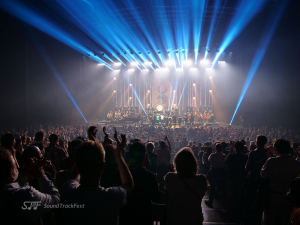 The ‘Two Steps From Hell Live – Europe Tour 2022’ began on June 13 in the German city of Hof, where Thomas Bergersen and Nick Phoenix, thrilled fans with their greatest hits on their first tour ever.

After 13 concerts in 9 different countries and more than 45.000 spectators, the tour came to a very successful end on July 2 in Krakow, Poland.

SoundTrackFest was present at some of the concerts of that tour, and now, one month later, in a special collaboration with Jfaudiovisuals, offers you this brief video-summary with some of the best moments of those concerts.

NOTE: Jfaudiovisuals and SoundTrackFest would like to thank Semmel Concerts and Tomek Productions, producers of the show, for the facilities provided for this video-report.

In a few days, an extensive article of the tour will be published in SoundTrackFest. Meanwhile, you can check the following Facebook posts with exclusive pictures of the concerts.

More information about the tour, photos & interview with Thomas and Nick: