As we already announced on August 11th (read news), the Basque National Orchestra will offer this Saturday, September 22nd, 2018 at 12:00h, and within the 66th edition of the San Sebastian Festival / Donostia Zinemaldia, a free concert dedicated to film music, as it has been doing in the previous years.

Here you have all the details about this concert, that has been called ‘Paseo por el Cine (Walk on the Cinema)’, expanding what was available when the original news was offered. 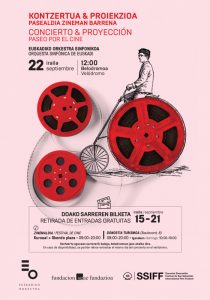 The concert will be performed at the Antonio Elorza Velodrome (San Sebastian, Spain), and will be in charge of the Basque National Orchestra conducted by Fernando Velázquez. It will last approximately an hour and a half and will feature the voices of actors of the Basque TV series Go!azen (Iholdi Beristain, Ainhoa Larrañaga, Aritz Mendiola), the singer Zahara and the choir Kup Taldea.

The concert will include music by the following Spanish composers: 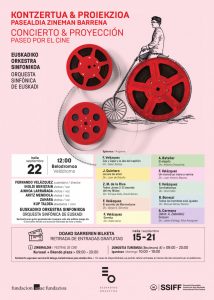 The concert will have an added visual element since the music will be enshrined with a projection on the 400 m2 screen located above the musicians, offering a montage of scenes from the films, created specifically for this concert by Carlos Rodríguez. In addition, some of the composers will attend the concert and will access the stage to present their work before the performance.

Tickets will be free and can be collected from September 15 to 21 in the offices enabled by the festival at the Kursaal and Okendo Square (from 9 am to 8 pm) and at the Tourism Office of the Boulevard (from 9 am to 8 pm from Monday to Saturday and 10 am to 7 pm on Sundays). In case of availability, tickets can also be picked up on the same day of the concert at the velodrome, which will have 2700 seats ready for this occasion.