The well-known record label Varèse Sarabande, specialized in publishing soundtracks, and which was acquired in early 2018 by Concorde Music (read news), decided last month to eliminate the position of vice-president of the company, occupied by Robert Townson, effective date January 31, 2019.

Thus, the veteran soundtracks producer Robert Townson, widely recognized and respected in the world of film music, left Varèse Sarabande after more than 30 years in the company, having released more than 1400 albums and having produced many concerts and live events. 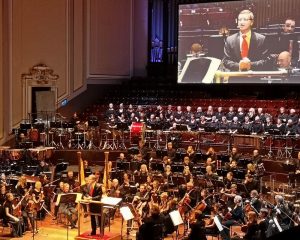 As it was published in an exclusive article in Variety (read more) containing Townson‘s declarations: “My career has included over 1,400 of the label’s frontline soundtracks and historic film-music restorations, new recordings and countless international live film music events. Robert Townson Concerts, previously Varèse Live, will not be affected by this and will continue its bright future course.”

Among the latest works of Robert Townson you can find the music compilation for the 40th anniversary of the company called ‘Varèse Sarabande: 40 Years of Great Film Music 1978-2018’ (read more) and the 2 concerts organized in Edinburgh and Glasgow (United Kingdom) in November 2018 celebrating that anniversary, with the presence of Robert Townson, Sara Andon, Patrick Doyle, David Arnold and Rachel Portman, and conducted by Diego Navarro (see photos). 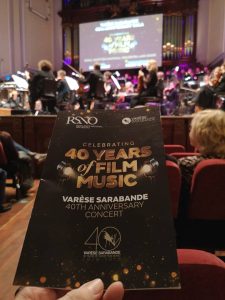 Robert Townson will focus his activity at this moment in the production of concerts and live events, through his label Varèse Live, which will change its name to be called Robert Townson Concerts.

Among his next plans are the following events:

From SoundTrackFest we want to say thank you, Robert Townson, for your great work to preserve and spread film music during all these years, either publishing CDs or producing concerts. We wish you all the best in your new projects, and we are sure that this year we will be able to enjoy interesting novelties and surprises, of which we will write detailed news.

Multiple film music concerts at the festival ‘Musika-Música’ in Bilbao...