Next Saturday, February 25th at 12:30 p.m., a special concert will be held by the Bilbao Symphony Orchestra (Bilbao Orkestra Sinfonikoa – BOS), conducted by composer Fernando Velázquez, which will also feature Javier Irigoien as narrator and master of ceremonies.

This concert will be part of the Family Concerts cycle offered by the BOS, and aimed at the young ones at home, will have the title of Zinema Musikatuz! (Which translated from Basque to Spanish means “musicalizing the movies”).

At the beginning of 2016, the BOS recorded the soundtrack of the film “Zip and Zap and the Captain’s island” composed by Fernando Velázquez, and although there’s no detail of the program in the official web, looking at the poster and the commentaries in the site, everything indicates that the concert will be focused on the music of the film, but explained in a didactic way for a children and young audience. 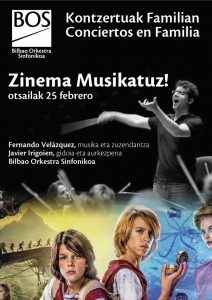 With a popular and unique price of 6 €, tickets for this special concert can be purchased at: