Next Saturday, February 4th at 8pm, the European concert tour Orchestral Memories will begin at the Salle Pleyel in Paris, which will feature video game music from Bandai-Namco games.

With an orchestra composed by more than 80 musicians, and with a giant screen in which high definition videos and images will be projected, the music of famous video games like Dark Souls, Tales Of, Tekken, Soulcalibur, God Eater, Pac -Man, Ace Combat, and many others will be played, being some of them the first time that they are preformed live officially. 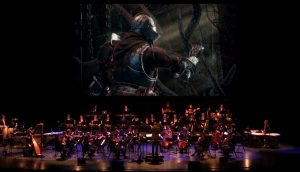 Composers Motoi Sakuraba and Go Shiina will be present at the concert, and attendees who are in possession of one of the 150 VIP tickets available for the event, will be able to meet them in person and be at the photo and signing session.

No more concerts of this European tour have been announced yet, but SoundTrackFest will keep an eye on this event, and will inform if more news are available. For the moment, here’s a promotional video of the event: