Blog - Latest News
You are here: Home1 / Articles2 / Fernando Velazquez in concert with the Extremadura Orchestra

At the end of July a special concert was held during the Festival Iberico de Cinema – Iberian Cinema Festival (read news) performed by the Extremadura Orchestra conducted by composer Fernando Velazquez. Curro Martín, composer, guitarist and tenor of the Ziryab Choir, was part of that evening and tells us what was lived there in this article, written exclusively for SoundTrackFest

On Saturday, July 22nd, at the Manuel Rojas Congress Palace of Badajoz, and during the 23rd Iberian Cinema Festival, a concert performed the Extremadura Orchestra, the Chamber Choir of Extremadura and the Ziryab Choir of Cordoba was held. The concert, directed by composer Fernando Velazquez, had a repertoire with a selection of some of the most representative of his works (along with some surprise …).

The price of the entrance was 10 euros, with the usual discounts for the different groups, although the subscribers to the festival had a special discount with admission priced at 7 euros.

The day before the concert, Velazquez had a meeting with the audience of the festival at 19:15 hours. This event, which was organized in collaboration with the SGAE, consisted of an interactive conference where he explained some of the ins and outs of the creative process of a soundtrack. 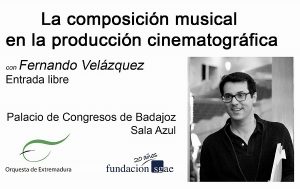 Just two months before and due to fate, I entered as a tenor in the Ziryab Choir, singing weeks before at the Cervantes Theater in Malaga during MOSMA 2017, and getting to know film music world referents like Trevor Jones, David Shire or Rupert Gregson-Williams. That was kind of a “baptism of fire” for myself, but nothing compared to the illusion of being able to sing the work of Velazquez, one of my most admired Spanish composers, and having the privilege of witnessing what awaited me that night in Badajoz.

The performance was scheduled for 9:00 p.m. and a few minutes before, the audience began to arrive in the immediate vicinity of the auditorium, which had a full house. The music of Fernando Velazquez has a timeless quality and perhaps due to that virtue, one could see among the attendees people of all ages, highlighting the presence of many young people.

From the outside, we could see that the architectural features of the venue are very spectacular, given its circular shape and avant-garde design, but full of charm. Once inside, we were told that despite the great acoustics of the concert hall, the dome had suffered a crack a few years ago and works to improve the expansion of the sound were pending. Because of this, the volume of the orchestra would be virtually superior to the choir in a natural way. This fact made the choir having to increase the volume a few decibels when singing, but it was not a handicap for a brilliant performance as both the singers and the orchestra solved this impediment achieving a great sound balance.

At 9:00 p.m. sharp, the concert began, with the groups occupying their places and Fernando Velazquez jumping to the podium on stage. From the beginning, we were able to realize his closeness and playfulness. Before starting the first piece, he explained that it was the first time he was conducting the Extremadura Orchestra and that he had been impressed by its quality, stating “What orchestra you have here!! …”. He also thanked the presence of the Chamber Choir of Extremadura and the long-distance traveled by the Ziryab Choir to participate in an evening that ended up being unforgettable. 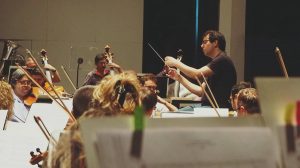 The first piece played was a suite of The Orphanage, a film directed by Juan Antonio Bayona in 2007 and that meant for Velazquez the success that opened him the doors to the public (although he already had other known films like El Sindrome de Svensson or The Backwoods). Although this film can be framed within the genre of terror and suspense, the maestro commented that the music consisted of a journey through the different changes of Laura, the character played by Belen Rueda. The performance of the orchestra was a remarkably skillful, as this suite consists of many changes in dynamics and ambience, ranging from the subtle to the emaciated. The choir obtained an outstanding lyricism and it sounded very compact.

After this suite came the music of Lope, a drama based on the youth of Lope de Vega directed by Andrucha Waddington in 2010. A score with a XVII century esthetics, marked by the courtly, martially and militaristic tones, but also with epic and heroism that delighted the attendees. A special mention for the beautiful tunes of the Spanish guitar.

The third theme was a suite from pieces of the recent Zip & Zap and Captain’s Island, a movie by Oscar Santos. On this occasion, Velazquez commented that sometimes he uses as a reference the number of syllables of the title of the film, before composing the main melody or certain “leitmotivs”, as was the case of the personage of Miss Pam (Elena Anaya) in this movie. Wonderful pirate music with a colorful and perfect orchestration, with echoes to buccaneering jewels like Hook (John Williams), Pirates (Phillipe Sarde) or Cutthroat Island (John Debney).

Following came one of the great moments of the night with The Impossible, one of the masterpieces of the composer, with a very emotional presentation of Velazquez talking about how difficult it was to express musically the effect of that tragedy on the characters, but also the self-improvement and the hope that happened afterwards; quoting the mythical phrase of the film “Do something … Anything”. That was not inconvenient to make a nice wink to the fact that Tom Holland (who played the son of Naomi Watts and Ewan McGregor in the film), had gone from being a child to becoming the new Spiderman. The performance of orchestra and choir was very precise and controlled until the delicate final coda, which ends up fading in the distance. The clamor of the audience was immediate. 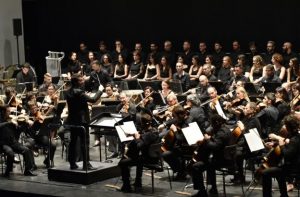 The most adventurous moment of the night arrived with Zip & Zap and the Marble Gang, with a burst of melodies and harmonies that took us back to the best cinema of the 80s with the Amblin factory. A work in which we could see the performers having fun while there was also a moment for the memory for the late actor of the film Alex Angulo.

The following piece was Crimson Peak (Guillermo Del Toro, 2015), with music that distilled dark and gothic ambience in a Lovecraft way, without neglecting certain romanticism, since Del Toro himself asked the composer to boost it to create a dichotomy with the story. Great work and performance of the string section of the OEX.

The music of the successful Spanish Affair (Emilio Martínez-Lázaro, 2014) came next, very nice with a “duel” between Andalusian and Basque folk instruments such as Andalusian and Northern castanets. It was very curious to see the percussion section emulating the particular timbre of the “txalaparta” (a Basque traditional instrument). A rhythmic score, syncopated and comic, with the prominence of the “pizzicatos” on violins, which forced people to dance on their seats in an irrepressible way.

A Monster Calls, third film with director Bayona and the one that gave the composer the Goya Award to the Best Original Music at the beginning of this year, was another delicatessen with which the Extremadura Orchestra achieved a great evocative sound thanks to a sensitive direction of Fernando Velazquez.

The power of the percussion section was evident in the suite of Hercules, directed by Brett Ratner in 2014 and starring Dwayne “The Rock” Johnson. The brass section also stood out next to a choir singing in full throttle as demanded such a strong score.

And this was the piece that ended the program of the concert, with an effusive applause from the audience. Velazquez came on stage again and conducted in a world premiere a fragment of the music of Submergence, a film by Win Wenders that hasn’t been released yet. In this collaboration with the famous filmmaker, Velazquez has paid homage to the music of French composers of the “nouvelle vague” like Delerue or Lai.

The last piece of the concert was Sexy Killer (Miguel Martí, 2008). A frenzy music with devilish tones where the drummer’s rocky groove and choruses stood out, simulating the souls in pain on hell, possibly victims of the crimes of Barbara, played by Macarena Gomez in the movie. With this theme concluded the concert, leaving a taste of having witnessed a unique show. 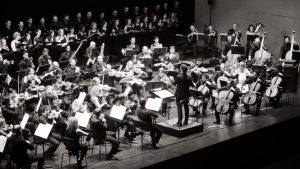 No doubt Fernando Velazquez is in a very sweet moment at a professional level, with a meteoric progression within the industry at international level in recent years. Surely in the future, he will continue to surprise us with new soundtracks that keep the level as high the ones included in this concert.

Curro Martin (born in Córdoba, 1981) is a composer of Film Score, guitarist and technician in audiovisuals, titled in Classical Guitar by the Professional Conservatory of Music of Cordoba in 2007. He has played in many rock bands like Mr.Mitas and 99 Shawarma, receiving awards at national level. As a studio musician, he has collaborated with artists such as the singer Vega or the film music composer Roque Baños.

In his work composing music for the audiovisual media are the feature films and spots for filmmakers Javier Lopez, Lalo Medran, Rosario Villajos, Edgar Burgos, Antonio Leal and companies such as 3Visual, Cristh Rod Guitars and ENGVision, using formats and styles ranging from the symphonic to the folk, through genres such as comedy, action, historical documentary, advertising or animated films.

He has composed the soundtracks of the independent films El Regalo de Blanca (Ernesto Lovera and Esther Salguero, 2011), The End of William (Juanma Peña and Fernando Ruiz, 2015) and La Gran Cena Andaluza (Adrian Pino, 2017). He also directs and presents the podcast From RedRum with Love, available on Ivoox; a radio program dedicated to film music of all ages with monographs on composers and collaborations with renowned critics and specialized writers.

He also gives lectures on the history of soundtracks such as the one held in Santa Cruz Crea 2017 with the pianist Alberto De Paz, which was dedicated to illustrate the creative processes of classical film music composers till these days, together with an analysis of the soundtrack A Monster Calls by Fernando Velazquez.