The concert that was going to be conducted by Fernando Velázquez along with the Royal Symphony Orchestra of Seville (ROSS) in Seville next Thursday, November 9, encompassed in the Seville European Film Festival, has disappeared from the map. The exact reasons for its cancellation are unknown, but both the page where tickets could be purchased at the FIBES (Palace of Congresses and Exhibitions of Seville) and the page of the ROSS where the concert was announced, are no longer available.

The concert was announced as follows, when the 2017-2018 program of the ROSS was presented in June:

“On November 9, the ROSS will perform under the baton of film composer Fernando Velázquez at FIBES, Palace of Congresses and Exhibitions of Seville, in a concert in collaboration with the European Film Festival in Seville”. 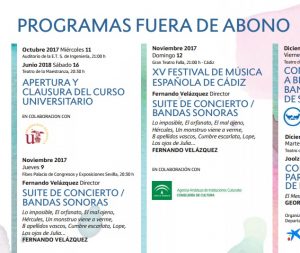 People who want to enjoy the music of Fernando Velázquez with the ROSS will be able to do it next Sunday, November 12 at 12:00 p.m., within the XVth Spanish Music Festival of Cádiz at the Gran Teatro Falla of Cádiz (Spain).

The evening is confirmed at this moment, and you can buy tickets with prices between € 5 and € 12 in:

The concert will have the participation of the Choir Ziryab and the repertoire will contain music by Alexandre Desplat, Alberto Iglesias, Philippe Rombi and Fernando Velázquez himself (with suites of: The Orphanage, The Impossible, A monster calls, Lope, Zip and Zap and the marble gang, Hercules and Crimson Peak).

This concert has been organized by the ROSS in collaboration with the Andalusian Agency of Cultural Institutions and the Ministry of Culture of the Junta de Andalucía.